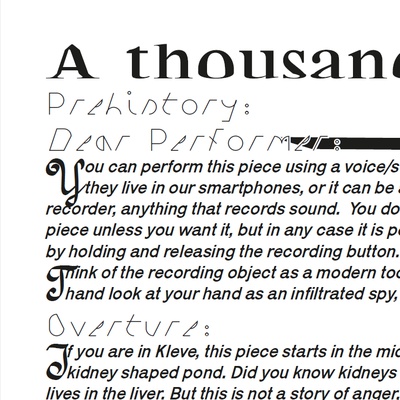 As a feeling that seems to have permeated everything that used to be mundane, discomfort is a culturally volatile, socially slippery sentiment. Keeping in mind the binding properties of affect, a plotless horror movie invites you to curiously and critically engage in discomfort. Taking the history of the Museum Kurhaus Kleve and the surrounding gardens as its starting point, the exhibition asks about this feeling’s past and ubiquitous presence, exploring discomfort as both an intimate feeling and collective situation. The five works that have been commissioned for this exhibition project include an installation in the halls of the Friedrich-Wilhelms-Bad and four scores that will be made freely available in audio and text format to everyone interested. The scores might be thought-provoking, healing, or teasing. They might invite imagination and speculation, and require one to leave one’s comfort zone, embrace moments of awkwardness, and accept that there is no immediate relief or no easy solution. Most likely, they will, in the best sense of the word, raise more questions than offer answers – and incidentally let us perceive the Museum Kurhaus Kleve and the surrounding garden landscape in a different way.

Holly Childs is a writer and artist. Her research involves filtering stories of computation through frames of ecology, earth, memory, poetry, and light. She is the author of two books: No Limit (Hologram) and Danklands (Arcadia Missa); and has presented her work at ICA (London), Stedelijk Museum (Amsterdam), Trust (Berlin), Elam School of Art (Auckland) and more. Gediminas Žygus is an artist working within the fields of sound, documentary and performance. Their practice assembles a spectrum of influences deriving from ecology, science studies, and media theory. As J.G. Biberkopf, their releases have found homes on Knives and Danse Noire. Žygus has performed at Barbican Centre (London), Berghain (Berlin), Sonic Acts (Amsterdam), and Centre Pompidou (Paris), among others.

Istanbul Queer Art Collective (IQAC) was founded in 2012 in Istanbul, to engage in live performance art with a view that the video and photographic documentation of performance is an art form in itself, as well as the props that are used and the concrete objects that are produced during these performances. The collective is currently based in London and comprised of its two founding members Tuna Erdem and Seda Ergul who are firm believers in what Jack Halberstam calls the “queer art of failure” and what Renate Lorenz calls “radical drag”. IQAC performs everywhere from art galleries to public spaces, from wild nature to cabaret stages; sometimes to live audiences expecting to see them, sometimes to the unsuspecting passersby and sometimes to the camera. Their performances range from the durational to the intimate and at times can morph towards other forms like sound art or installation and embrace the art of re-enactment and remake, with a strong emphasis on storytelling.

Painting on canvas, murals, textile drapes, body parts as protagonists of the compositions, and the trompe l'oeil are the different elements characteristic of Sarah Margnetti’s practice. The artist owes her interest in the trompe l'oeil technique to her training in decorative painting, in which she specialized in the imitation of wood and marble. In her work, however, illusionism is not a goal in itself. It is not a question of making people believe in a naturalist reality, but rather to make visual reference to an artistic tradition in order to question the conditioning of the gaze to social and cultural norms. Specifically, parts of the bodies, often explicitly feminine, evoke in her work the historical role of art or decoration in the subjugation and reduction of the body to the state of an object. Sarah Margnetti is often her own model: it is her own body that she observes and exposes in reproducing it by fragments in its pieces. She thus takes control of her image and masters the degree of exhibition in a game of hide-and-seek with the elements of the decor.

Tabita Rezaire is infinity incarnated into an agent of healing, who uses art as a means to unfold the soul. Her cross-dimensional practices envision network sciences - organic, electronic and spiritual - as healing technologies to serve the shift towards heart consciousness. Navigating digital, corporeal and ancestral memory as sites of resilience, she digs into scientific imaginaries to tackle the pervasive matrix of coloniality and the protocols of energetic misalignments that affect the songs of our body-mind-spirits. Inspired by quantum and cosmic mechanics, Tabita’s work is rooted in time-spaces where technology and spirituality intersect as fertile ground to nourish visions of connection and emancipation. Through screen interfaces and collective offerings, she reminds us to nurture each other, the earth, spirits and to download directly from source. Tabita is based in Cayenne, French Guiana. She has a Bachelor in Economics (Fr) and a Master of Research in Artist Moving Image from Central Saint Martins (Uk). Tabita is a founding member of the artist group NTU and half of the duo Malaxa. She is currently birthing AMAKABA, her vision for a healing center in the Amazon forest of French Guiana.

Liv Schulman (*1985 in Paris, France) is a filmmaker, performance artist and writer who grew up in Buenos Aires. She creates characters and collectives who utter logorrheic speeches drawing upon a vast variety of sources, trying to recreate the affects and phantasms that rule today’s neoliberal economy. She lives in Paris.

A joint project with:

The exhibition is supported by: